To Wear or Not to Wear a Medical Bracelet 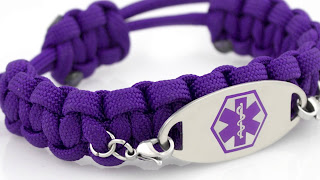 Until quite recently, I hadn’t.  Caught in a conundrum of whether or not to wear a medical bracelet, I hemmed, I hawed, and I finally chose to wear one.  Of course, I would believe there’s no question but to have  But I’m not., and it’s likely you aren’t, either.
one… if I were driven by sheer logic.

The question, then, comes down to the practical vs. the emotional.

·      Get the right help:  Strangers need to know what’s wrong when you have a seizure.  They could mistake your seizure for a drug-related event, a different neurological disorder, schizophrenia, diabetes, or another culprits.  If they do, you may find yourself in jail or a psychiatric facility rather than an ER or your home.

Don’t shock others.   Those who know you, but not about your epilepsy, may be in for a shock if you suddenly have a seizure.  When I’ve had them at workplaces where people were unaware of my condition, I’ve been racked with regret afterwards, knowing I frightened others.

But on an emotion level:

·      Label it:  A medical bracelet is literally a label seen by the world.
·      Come on out:  People will ask what it’s for, and you’ll have to tell them.
·      Admit it to yourself:  If your seizures are infrequent, somehow, with the bracelet on, you have to admit to yourself that you have something that you may be ashamed of having.
·      Yuck:  You just don’t like the way they look... though there are many to choose from.

These days, I fall on the practical side.  For many years, though, wearing a bracelet made me, well, shudder.  I was one of those hiding my epilepsy, in many ways as much from myself as others.  Taking my pills had become automatic, and I rarely consciously associated the medicine with my disorder  Then I’d have a seizure, and, depending where I was and who I was with, things could go very wrong.

One time, I had a tonic-clonic seizure at O’Hare Airport, 800 miles from home.  Hitting my head, I woke up paraplegic between cluster seizures.  There was no ID on me, and, thankfully, the hospital staff was able, circuitously, to track down someone who knew me.  I had to stay in the ICU for three days, and I know I would have gotten the needed care much earlier had I given them a straight path to answers by wearing a medical bracelet.

After four months, I was able to walk -- though I can’t run and have spotty numbness. I don’t know what the outcome would have been if I had been wearing a bracelet, but I suspect, with a faster response to my condition, I might have suffered fewer long-lasting effects.

Regardless, I would have had better emergency care.  After this, I wore a bracelet, and I never take it off.  I considered wearing the more subtle necklace, but I doubt anyone other than an EMR would look for it.

To say the least, it’s a personal decision, and an especially tricky one for PWE who hide their disorder.  There’s one more “pro” to consider.  If you’re one of us who would like to help end the stigma against epilepsy, a medical bracelet can lead to a good opportunity.  When someone asks you what it’s for, often expecting to hear “bee allergy” or some such, tell them without flinching and with as much pride as ever.  Then, see if they have questions.  If they don’t, fill in the blanks with information to educate them about the condition.  I’ve found most people are fascinated, and now they have a face to put to it.  Yours.

Go ahead.  Take the plunge.